Earlier this year, the news that Barstool Sports and the Call Her Daddy Podcast series couldn’t agree on contractual terms became big news. It’s not often that drama from a podcast series makes national news, but earlier this month, millions of listeners tuned in to hear about the controversy that took the Call Her Daddy podcast off the air for an extended period of time. While the most obvious take-away from this conflict was related to the drama that follows success, we looked at the dispute through a different lens. Specifically, we saw why Alex Cooper’s success is no secret.

Call Her Daddy is a new-age podcast that has taken the world by storm discussing traditionally taboo topics like sex and partying. Hosted by two very attractive young women, Alexandra Cooper and Sofia Franklyn, the podcast quickly gained traction in pop culture. Fans of the podcast, and followers of Barstool Sports, were well aware of the sudden halt of content production. What I believe is telling, is what this conflict revealed about the work habits, professionalism, and self-awareness displayed by the remaining member, Alex Cooper.

Every team has a leader, and in this case, Sofia Franklyn took the backseat to Cooper. I don’t know the intricacies of the duo’s relationship, but I do know that it was made clear Cooper was the engine that made Call Her Daddy go. As each side revealed the true story from their own perspectives, Cooper unintentionally, demonstrated why college athletes are some of the most highly coveted members entering the workforce.

Cooper was a soccer player at Boston University for three years, and while her statistics are not overly impressive, anyone who plays competitive sports knows that becoming a division 1 soccer player is no small task. Only 2.4% of females who play soccer in high school reach this level, and it takes discipline, commitment, and perseverance. Seeing your commitment payoff  results in confidence, and translates into great success in the workforce. Let’s see how this applies to Cooper and her professional success.

College athletes are goal oriented; they know what they want and are willing to devote the time to make it happen. Call Her Daddy began when Cooper took advantage of an opportunity to do a podcast with a startup. At the time she was collecting an unemployment check and experimenting as an Instagram influencer. She caught the attention of Barstool President Dave Portnoy, and on her own, went in to meet him with a goal to land a deal with Barstool and she achieved that goal. She was determined to reach that goal, and she did it.

College athletes understand what it means to prepare. Preparation and game planning are integral to success in athletics and in business. In her coming out video Cooper explained her strategy for editing the podcast, and how it catered to their primary audience. The goal was to have a podcast that never had a dull moment in order to appease the short attention span of the millennial/Gen-z listeners. In order to do this, Cooper consistently edits three hours of recorded content down to one hour. As Cooper explained, “On a good day this takes 7-20 hours. This is a multi-day process.” That, in addition to marketing and advertising, required serious commitment and time management skills, on top of being a major on-air personality. The preparation and strategizing that goes into executing one of the top podcasts in America parallels the early morning lifts, hard practices, intense conditioning, long film sessions, and necessary recovery and rehab that go into performing at a high level athletically.

College athletes understand sacrifice. Cooper was willing to sacrifice her ego for the betterment of the team (her and Sofia). Cooper revealed that she was the one doing all the work, which Franklyn had no issue with behind the scenes, but she was uncomfortable with that being known publicly. Listeners assumed Cooper and Franklyn were carrying equal weight in terms of production, bringing similar value to the show. In reality, Cooper was doing all the work behind the scenes, and brought Franklyn along for the ride to fame. The ability to be a team player, act selflessly, and in this case put the show first, is absolutely a reflection of the qualities she learned growing up as an athlete. Most college athletes were the stars of their high school teams, but must make sacrifices in their role when they transition from high school to college. Statistically, it appears that Cooper was far from the star of her team in college, but we should not forget Cooper was a First Team All-area performer as a junior and senior in high school, and also won a national championship with her club team in 2010. 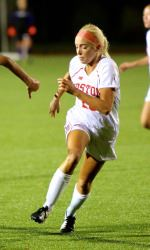 College athletes can perform under pressure. In Cooper’s junior year at Boston, she began the year as a starter playing significant minutes.  After starting in five of the first 6 games of the year she was removed from the starting lineup, and her minutes began to fluctuate over the course of the season. All athletes know how frustrating this can be, and how easy it is to lose focus and confidence when this happens. However, it appears that Cooper was not phased, never made excuses, and never let this deduction in minutes affect her or her team. After only playing an average of 26 minutes in the 9 games leading up to the Patriot League Championship against Bucknell, Cooper stepped up big time in the championship game putting four shots on goal helping Boston claim the Patriot League title. Then, in the first round of the NCAA tournament she delivered again with a game tying goal against St. John’s, helping her team advance to the next round. She was then rewarded with a start in the final game of her career against Penn State in the second round of the NCAA Tournament.

Selflessness is a common cultural characteristic for successful sports teams and businesses alike. Not only does this show that Cooper was extremely selfless and did not make excuses, but it showed she can perform at a high level under pressure. In her first solo podcast on Call Her Daddy, Cooper revealed the intense pressure she was under to maintain the success of Call Her Daddy in addition to the fact that there were millions of people listening to her. Cooper translated her ability to handle pressure from sports into her business model, managing a successful podcast that always found ways to stay original, funny and relevant at just 25. This is why so many high pressure sales jobs target college athletes; they know candidates with athletic backgrounds have the competitiveness and wherewithal to handle these jobs better than most.

Obviously, these qualities aren’t athlete-exclusive, and plenty of people with no athletic background excel in the workforce, but there is something to say about how college athletics equips people with the skill-sets they need to thrive. It is possible my inferences about Cooper and her experience with athletics are biased, as a former athlete myself, but after learning about her habits and true character it seems that the two go hand in hand. Cooper was a winner on the soccer field, and is now a winner in business. There are no secrets to success in life, winning requires preparation, discipline, and commitment. We certainly know there are no secrets to the success of Call Her Daddy.